In Greek, the word harmonia means “congruent,” or “fitting together.” 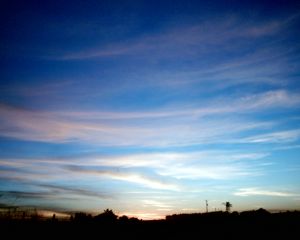 The Greek words for "harmony" (harmonia) and "number" (arithmos) both derive from the Indo-European root (a)ri, recognizable in such English words as rite and rhythm. In Vedic India, rta meant unity or cosmic order.

The Harmony of the World

Kepler considered the Harmonices Mundi (The Harmony of the World, 1619) his greatest work. The text relates his findings about the concept of congruence with respect to diverse categories of the physical domain: regularities in three-dimensional geometry, the relationships among different species of magnitude, the principles of consonance in music, and the organization of the Solar System. Here we seek to highlight issues that provide a flavor of his thought.

Kepler entitled the first book of The Harmony of the World:

"On the regular figures, the harmonic proportions they create, their source, their classes, their order, and their distinction into knowability and representability." (The Harmony of the World, Book I)

Plato is credited with discovering that only five three-dimensional, convex solids can be formed using regular convex polygons (the so-called Platonic Solids). When a sphere is circumscribed around each shape touching all its corners, the vertices mark off spherical polygons that define the only possible equal divisions of the sphere's surface area.

Earlier, in the 1597 Mysterium Cosmographicum Kepler proposed that a nested arrangement of the Platonic Solids determines the spacing between the planetary orbits. 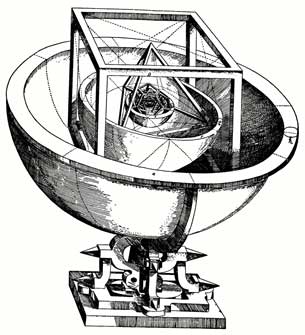 He expanded his investigation of three dimensional geometric shapes, notably of the semi-regular Archimedean Solids, in The Harmony of the World.

By the 6th century BCE, the Greeks discovered that the length of the diagonal of a square can not be expressed by any multiple of its side. No whole number ratio can express precisely the magnitude of the diagonal with respect to the side. The diagonal's length can only be approximated by an infinitely repeating fraction.

The discovery of these irrational numbers marks a major departure in the history of human thought. Although finite in extension, these numbers are inexpressible or incommensurable (meaning they share no common measure) with the whole or natural numbers. The irrationals represent a completely different species of magnitude.

The Greeks were careful to use entirely different words to denote a number (in Greek, arithmos) and a magnitude (megethos).

The diagonal of the unit square above produces a square of doubled area. This is true of all diagonals of squares. These diagonals, which are incommensurable magnitudes, represent the generating powers for squares of doubled area.

One of Kepler's contemporaries, the mathematician and philosopher Pierre de la Ramée (1515-1572) wanted to eliminate detailed discussion of these magnitudes from the mathematical curriculum. Kepler disagreed and argued that the magnitudes are essential to understanding the cosmos, and knowable by their relations. Kepler devised a system for classifying both commensurable and incommensurable magnitudes into a system of "degrees of knowability," using the circle as a relative unit of measure.

The Greek philosopher and mathematician Pythagoras of Samos (c. 580- c. 500 BCE) is credited with discovering that the harmonic intervals correspond to unique whole number proportions. Dividing the vibrating string of a musical instrument in the ratio 1:2 produces the interval we call an "octave." Dividing a string in a 3:2 ratio creates the interval we call the "fifth," producing the difference between do and sol. A "fourth," the difference between do and fa, represents a 3:4 division of a string.

Today, we recognize that these musical intervals are produced by, in the case of an octave, doubling the rate of vibration of a string (from 200 vibrations per second to 400).

A "fifth," the difference between do and sol, would be produced by two strings vibrating in the ratio of 200 to 300.

Kepler rigorously investigated auditory space through experimentation. The followers of Pythagoras limited their musical system to the three intervals mentioned above. Kepler sought to determine all of the possible harmonic ratios for sound, and to inquire as to their causes in the domain of geometry and mathematics. 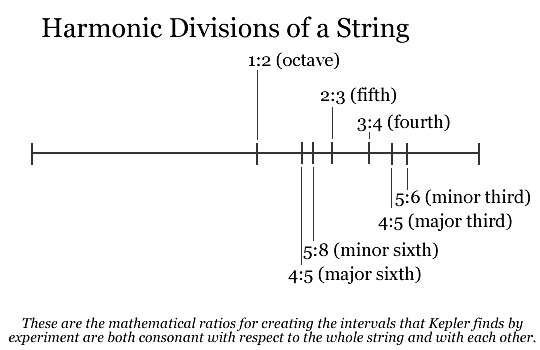 Refuting the musical theories of the ancient Greeks, Kepler questioned if there truly were a "unit" or the "one" common to all the harmonic divisions of the string? Did there exist a smallest interval or "common factor" from which each other harmony could be constructed?

Kepler found that there was not.

Efforts to find a "common factor" left small discrepancies such as 1/81 of an octave (called the syntonic comma in musical terms) between harmonies. Without some system of "tempering" to adjusting for these discrepancies, the "commas" would accumulate on an instrument based on equal steps, such as the piano, throwing off harmonies as one continued up the range.

Vincenzo Galilei (1520-1591), Galileo Galilei's father and a musical theorist, championed a system of equal tuning that "split the difference" the "commas" represented in order to facilitate composition and performance on the piano.

Kepler regarded this idea as simplistic and mistaken. A more elegant system for tuning, he thought, needed to be found.

Just as planetary orbits were not based on perfect circles, the principles underlying harmony could not be reduced to musical "atoms" without sacrificing true consonance.

Continuing the search for organizing principles first taken up in the Mysterium Cosmographicum, he asked if the greatest and least distances between a planet and the Sun might approximate any of the harmonic ratios, but found they did not.

He looked at the speed of the planets at the points where they move fastest and slowest, noting that movement represents a better analogue to harmonic vibration than distance.

In fact, he found that planets did seem to approximate harmonies with respect to their own orbits. The maximum and minimum speeds of Saturn (measured in terms of arc seconds seen from the Sun) differed by an almost perfect 4/5 ratio (a major third). The extreme motions of Jupiter differed by a 5/6 ratio (a minor third in auditory space). The orbits of Mars, the Earth, and Venus approximated the following harmonies: 2/3 (called a "diapente") for Mars; 15/16 for Earth, or the difference between mi and fa; and 24/25 for Venus.

Scholar D. P. Walker writes, "Kepler's celestial harmonies are unique in several respects. First, they are real but soundless," whereas the Greek and medieval music of the spheres is "metaphorical."

Seeking still more precise harmonies, he examined the ratios between the fastest or slowest speed of a planet and slowest or fastest speed of its neighbors (which he calls "converging" and "diverging" motions). He discerned harmonies in each case with discrepancies smaller than a "diesis," or 24/25, the smallest harmonic interval that a human ear can discern.

Kepler discovered, he believed, that harmonic relationships structure the characteristics of the planetary orbits individually, and their relationship to one another.

The only interval among the "converging" and "diverging" motions with a deviation from harmony larger than 24/25 is the diverging motion of Mars and Jupiter which is off by 18/19, Kepler found.

Why is this so, he wondered.

Kepler, writing in 1619, did not know of the existence of the asteroid belt, in the region of interplanetary space between the orbits of Mars and Jupiter. The asteroid belt would not discovered until 1801. 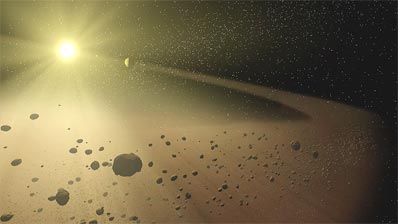 The gap in Kepler's theory of the harmonic theory of the planetary orbits represented by the asteroid belt seems to indicate that he had discovered something consequential about the ordering of our Solar System.

After Kepler sent The Harmony of the World to the printer in 1619, he attained the end of a separate but related, and longstanding, quest: To discover some definitive relationship between the periods of the planets, or the time it takes planets to complete a revolution around the Sun, and their distance from the Sun.

From his earliest investigations Kepler knew that the speed of the planets decreases with increasing distance from the Sun, and he sought some rule or principle that connected speed and distance. Believing as he did that the same immaterial species of universal gravitation produced all planetary motion, he was convinced that a regular relationship must exist.

Thus, in the course of his concluding investigations into the harmonic structure of the cosmos, Kepler discovered that the ratio of the square of a planet's period to the cube of its semi-major axis (see below) is constant for all orbits.

Today, we know this relationship as Kepler's Third Law. Many consider it to be one of the most elegant results in all of astronomy. 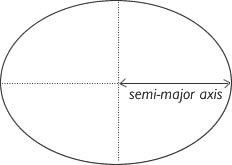