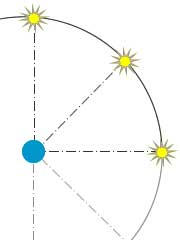 Upon arriving in Prague, Kepler was surprised to learn that Tycho Brahe, like Ptolemy and Copernicus, reckoned "oppositions" from the “average” or "mean" position of the Sun rather than the Sun’s actual position in the sky.

Kepler wrote, “When I found out during the first week that, like Ptolemy and Copernicus, he made use of the Sun’s mean motion, while the apparent motion would be more in accord with [my own thinking in the] Mysterium Cosmographicum, I begged the master to allow me to make use of the observations in my own manner.”

Kepler recognized that reckoning "oppositions" from the mathematically-determined, average position of an imaginary Sun implied critical assumptions about the shape and nature of the Sun's/Earth's orbit depending on the model used.

In the 1600s, astronomers could determine when the Sun, Mars, and Earth were on the same line by one of two methods: By calculating when, on average the Sun, would be at a given point assuming it moved at a uniform rate, or by identifying days in the table of observations when the planet Mars rises exactly when the Sun sets (or vice versa).

Using the Sun's "mean" or "average" position assumed among other things that the Earth or Sun (depending on which body is at the center in the model used) traveled on a perfectly circular orbit at a uniform rate.

Keenly aware that Copernicus built his system based upon 1,500 year old observations, Kepler noted that when Copernicus "transformed the Ptolemaic hypothesis into his own general form" he supposed the observer to be stationed at some nearly motionless point near the Sun,” not at the Sun itself--meaning, he reckoned "oppositions" using the "mean sun."

Kepler explained how, by using Ptolemy's measurements computed from the Sun's "average" motion, Copernicus inadvertently fixed the center of the line of sight for the measurement not at the Sun but at an empty point at the mathematical center of the orbit.

Kepler re-examined the positions of Mars in the Copernican model - the model of most interest to him - since he too supposed a Sun-centered Solar System in his Mysterium Cosmographicum.

Kepler sought observations from Brahe's tables where the Sun set at the same moment Mars rose (or vice versa), indicating that the planets lay on the same line in space.

Kepler set out to reevaluate the science of astronomy minus the set of assumptions embedded in the use of the "mean sun."