Who was this “Nicholas of Cusa," and how did he influence Kepler's thought? 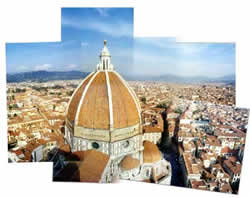 A renaissance-era statesman, mathematician and philosopher, Cardinal Nicholas of Cusa (1401-1464) led the ecumenical movement in the 1439 Council of Florence (seeking the union of the Eastern and Western churches) and set forth many of his ideas on scientific inquiry in the 1440 treatise On Learned Ignorance ("De Doctra Ignoranita").

In the Mysterium Cosmographicum, Kepler cited Cusa's insight regarding the difference between the "Straight" and the "Curved" that while "an inscribed polygon grows more like a circle the more angles it has," "even though the multiplication of its angles were infinite, nothing will make the polygon equal the circle unless the polygon is resolved into identity with the circle." (On Learned Ignorance, in Nicholas of Cusa: Selected Spiritual Writings, H. Lawrence Bond translation, p. 91)

The straight and the curved represent incommensurable species of magnitude.

Composed after a three-month long ship voyage to Constantinople for an ecumenical council, in the company of the brightest minds of the Greek world, On Learned Ignorance represents a return to the Socratic mode of inquiry in spiritual as well as scientific affairs. Socrates began his investigations from the premise, "All I know is that I know nothing." Likewise, Cusa enjoins readers to investigate the world in the spirit of "learned ignorance."

A motivating theme in On Learned Ignorance is the idea that the human mind never obtains a precise portrait of the world since it knows all things by relation.

"Every inquiry is comparative and uses the method of proportion," he writes. "Perhaps this is why Pythagoras insisted that all things are constituted and understood through the power of numbers." (Bond translation, p. 88)

Yet even though we know all things by "likeness," we can resolve our knowledge of truth down to finer and finer elements by investigating the world of our minds and of phenomena in the spirit of "learned ignorance."

Cusa's work also contains the first modern discourse on the subject of the Infinite. The "unqualifiedly Maximum," beyond which "there can be nothing greater" is something that the mind can only approach through metaphor, Cusa asserts, or that can only be "incomprehensibly understood."

To explore the nature of the Maximum (and Minimum, which the Maximum coincides, Cusa says, since both are "transcendental"), he employs a number of geometrical analogies to help the mind "leap beyond simple likeness."

In the Maximum "all things are one:" A triangle, a line, and and a circle are one, and "curvature is straightness."

Because the Maximum is "absolute, it is actually all possible being and contracts nothing from things, for all things come from it." Oppositions "apply only to those things that admit of a greater and a lesser," but "never to the absolutely maximum, for it is above all opposition." (Bond translation, 92)

Cusa helped overthrow Aristotelian metaphysics, paving the way for Kepler. He maintained that all motion and substance in the material world must be non-uniform.

In the context of his discussion of the "quadrature of the circle" he writes, "Clearly, therefore, two or more objects cannot be so similar and equal that they could not still be more similar ad infinitum. Consequently, however equal the measured and the measured thing may be, they will always remain different." (Bond translation, 90)

He continues, "Wherefore it follows, that, except for God, all positable things differ. Therefore, one motion cannot be equal to another; nor can one motion be the measure of another, since, necessarily, the measure, and the thing measured differ. Although these points will be of use to you regarding an infinite number of things, nevertheless, if you transfer them to astronomy, you will recognize that the art of calculating lacks precision, since it presupposes that the motion of all the other planets can be measured by reference to the motion of the sun. … And since no two places agree precisely in time and setting, it is evident that judgments about the stars are, in their specificity, far from precise . . .”

Cusa also asserts,"Therefore, the earth which cannot be the center, cannot be devoid of all motion. Instead, it is even necessary that the earth be moved."

One of the most versatile minds of the Renaissance, Nicholas of Cusa swept aside the Aristotelian cosmology based on perfect forms.

In Cusa's view, non-uniformity in shape and motion is the condition rendering the universe susceptible to knowledge. Because the human mind knows all things "by relation," if motions and shapes were uniform or "perfect" humankind would never be able to know the world.