Ancient astronomers noticed that although the planets moved irregularly, they always appeared in the same narrow band of the sky. Today, we know that this narrow, 9 °-wide section of the sky represents the plane of our Solar System. (All of the planetary orbits in our Solar System lie in roughly the same plane).

Because the Earth is tilted on its axis by 23.5°, the plane of the Earth's orbit (and Solar System) is thus tilted with respect to the horizon by 23.5°. (See the illustration). 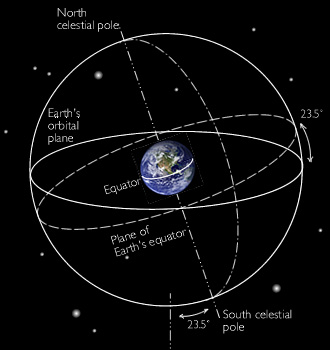 Ancient observers named the 9°-wide region of the night sky where the planets appear the “Zodiac.”

How did astronomers chart the movements of the stars without modern equipment?

Colatitude: in a spherical coordinate system, a colatitude is the complementary angle of a given latitude, that is, the difference between 90֠ and the latitude. Southern latitudes are assigned negative values

Observers also imagined a “celestial equator” at the great circle on the celestial sphere 90° from the pole star. This great circle represents the equator of the Earth projected out into space. 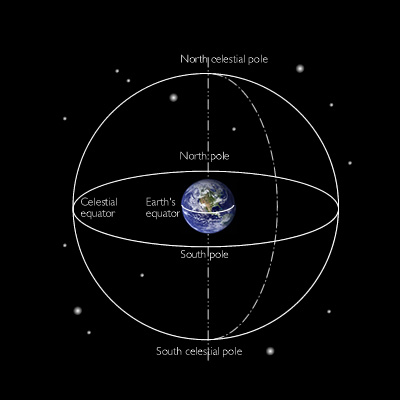 Longitude is a geographic coordinate that specifies east-west position of a point on the Earth’s surface or the surface of a celestial body. It is an angular measurement, usually expressed in degrees. 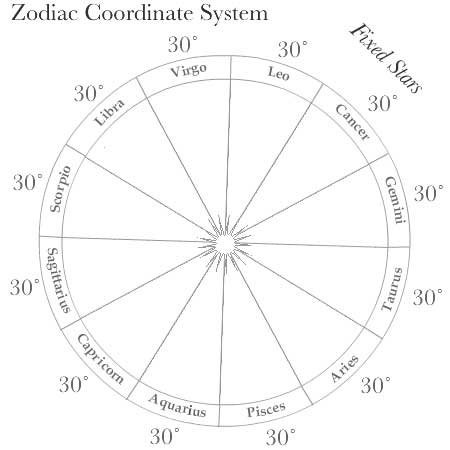 Ancient astronomers divided up the 360° circle of longitude on the Zodiac into 12 sections of 30° each, and named each 30° section for the most prominent constellation in it. Two bright stars, Antares and Aldebaran, lying 180° opposite from each other in the center of their respective constellations anchored the system and served as points of reference.

During the time of astronomer Johannes Kepler, longitudinal stellar measurements were reckoned as follows: “22° 11 minutes 6 seconds Libra,” indicating the angular distance a star was found beyond a particular constellation.

All the major Eurasian civilizations of the ancient world (India, China and Mesopotamia) shared the Zodiac coordinate system, which endured for centuries.