At the same time he re-conceptualized "oppositions" as based upon the observed, rather than "average," position of the Sun, Kepler analyzed Brahe's individual observations of Mars for potential errors of various other kinds. In Chapters 8-15 of the New Astronomy, Kepler explored how optical issues and errors in computation could skew observations of a planet.

The text and illustrations below explore just one of those technical issues.

Referring positions to the "Ecliptic"

In order to measure changes in a planet's longitude with respect to the fixed stars it was necessary to translate the planet's observed position onto the great circle on the celestial sphere that corresponds to the Earth's orbit, called the "ecliptic," because it represents the plane where eclipses occur. 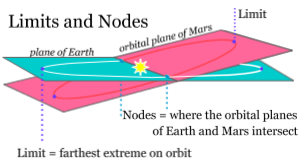 To do this, astronomers would rotate the observed position down as if on the outside of a sphere on an arc originating at the node (the point where the orbital planes of Mars and the Earth intersect. See animation below).

Kepler realized that the manner in which astronomers traditionally made this correction was flawed. The traditional method assumed that the line of sight to Mars in the observation originated from the Earth. Kepler noted that in measurements taken at "opposition," the line of sight to Mars by definition originated from the Sun.

The prevailing method of making the correction introduced an error of up to 7 minutes of arc, Kepler found. His argument for a "New Astronomy" would ultimately hinge on a discrepancy of 8 minutes of arc.

When referencing the planet to the "ecliptic" (the plain of Earth's orbit), latitude corrections were previously made with the Earth as the origin of the line of sight instead of the Sun. However, the Sun serves as the point of reference against which "oppositions" are reckoned.

Reassessing Brahe's original data in this manner, Kepler identified 12 "achronycal positions" (measures at "opposition") for Mars. He located the moment the planets are in a line using sunrise and sunset times instead of the Sun's "average" motion, while making corrections for distortions caused by the atmosphere (refraction) in light of principles discussed in his work Optics. (In Chapter 16 Kepler notes that these optical corrections alone took him almost an entire year).

The twelve positions of Mars shown in the table below constitute the data Kepler used to determine the shape of the orbit of Mars.